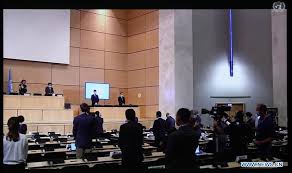 The UN Human Rights Council on Wednesday held an urgent debate on systemic racism and police brutality at the request of African countries amid the unrest in the United States and beyond over the death of African American George Floyd in police custody in Minneapolis.

Participating in the debate, Permanent Representative of Morocco to the United Nations in Geneva Omar Zniber expressed Morocco’s anti-racist solidarity and clear position on racism.

“Morocco aligns itself with all those who have spoken out strongly against racism and the acts of violence that flow from racism,” said Zniber, underlining the kingdom’s deep values of tolerance and coexistence, and emphasizing its condemnation of all forms of racism.

The Moroccan diplomat echoed the council’s call to urgently address the issue and use current international momentum as an opportunity to prioritize creating “long-awaited change for the benefit of future generations.”

The council, he continued, “should use all its appropriate mechanisms, or even new procedures to determine with precision the forms of police violence, or any repression or violation of the rights which are similar to racism.”

“Morocco calls for vigilance in the face of the rise of antagonisms of an identity nature, the consequences of which could prove to be extremely dangerous, even catastrophic, not only for populations who would be victim of it, because of the color of their skin or their origin, but also on the maintenance of public order, peace and security, regionally and internationally,” he warned.

The diplomat underlined Morocco’s overwhelming tolerance, rooted in its plural identity. “As a melting pot of populations of diverse origins, enriched by its African, Andalusian, Hebrew and Mediterranean tributaries, Morocco is steeped in culture and values of tolerance, coexistence and recognition of the other,” he said.

Yet, despite the country’s rich ethnic roots, Morocco, like most countries, has often struggled to deepen institutionalized measures and more critically identify acts of racism, he said.

Opening the council meeting, which began with a moment of silence for all the victims of racial injustice, UN Deputy Secretary-General Amina Mohammed said merely condemning expressions and acts of racism was not enough to alleviate generations of suffering resulting from racial injustice.

Speaking by teleconference from New York, she said the “most recent trigger” for the protests around the world was the Floyd case, “but the violence spans history and borders alike, across the globe. Today, people are saying, loudly and movingly, ‘Enough.’ The United Nations has a duty to respond to the anguish that has been felt by so many for so long.”

The UN High Commissioner for Human Rights Michele Bachelet deplored the death of Floyd and said it had come to symbolize the systemic racism that harms millions of people of African descent.

“It has brought to a head the outrage of people who feel they are neither adequately served, nor adequately heard, by their governments,” Bachelet said. “It has brought to their feet millions of allies — people who are now beginning to acknowledge the realities of systemic discrimination suffered by others, and to join their demand that every person in their countries be treated with equality, fairness and respect.”

Floyd’s brother, Philonise Floydn gave an emotional address to the council by teleconference from his home in Houston, describing his family’s anguish while watching the last moments of his brother’s life.

During the debate, several speakers endorsed the idea of creating an independent commission of inquiry into the death of George Floyd, urging the Council to take action and not become a passive observer.

Some speakers who deplored the use of social media platforms in inciting racial hatred, said that there were no easy fixes to racism, and that building an equal society “begins with each of us.”
Racism and other forms of discrimination were still rampant and existed in all societies no matter how rich they were. No country was immune from the scourge of racism, speakers said.

Citing race-related challenges they faced in their own countries, speakers said they remained conscious that the fight against racism was not won by words and proclamations alone, and called for all to look inwards to combat the legacies of slavery and colonialism that continued to haunt the world. The singular incident of the brutal death of George Floyd reflected a much wider, global problem of racism and racial discrimination.

The Black Lives Matter-led protest movement had shaken the entire world. Quoting Malcom X, speakers said the matter at hand was not a “black problem” nor a “white problem”, but rather one that concerned all of humanity.