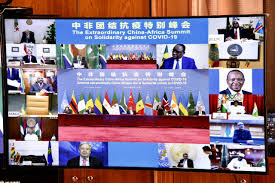 The Chinese government has excluded the polisario from the extraordinary China-Africa summit 2020, dealing a hard blow to the polisario and Algerian rulers who are disoriented and disheartened to see that all schemes hatched against Morocco’s territorial integrity are falling apart.

Fearing to irk Beijing, Algerian President, Abdelmajid Tebboune did not utter a word on polisario or the Sahara issue during the Summit held Wednesday via videoconference to discuss ways of enhancing international solidarity to contain Covid-19 pandemic.

Participation in the virtual extraordinary summit was open to all African States recognized by the international community to the great displeasure of Algeria, whose president was forced to realize that the Polisario and its so-called “SADR” republic were once again totally ignored as they lack international recognition and legitimacy.

This is not the first time that Beijing has refused to allow the separatist movement of Brahim Ghali to attend a China-Africa Summit. The Chinese officials had opposed Polisario’s presence at the 2nd China-Africa Summit held in Johannesburg in 2015, despite pressure exerted then by Algeria and the host country, South Africa. The same firm stand was upheld by Beijing at the 3rd China-Africa Summit convened in 2018.