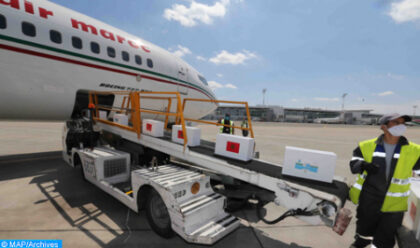 Mauritanian Foreign Minister Ismaël ould Cheikh Ahmed has welcomed the decision made by King Mohammed VI to dispatch medical aid to 15 African countries, including Mauritania, to help them in their fight against the coronavirus health crisis, saying the royal decision responds perfectly to the national and regional context.

The Foreign Minister’s remarks came after Mauritania received, Sunday, June 14 in the early afternoon, a large donation of medical materials, equipment and drugs.

He praised the relations existing between his country and Morocco and voiced appreciation for the fact that Mauritania would benefit from Moroccan expertise in the fight against the coronavirus pandemic.

The Mauritanian top diplomat voiced appreciation for “the precious support of a brotherly country, in the context of a rapidly expanding pandemic, which will help medical personnel fulfill their mission towards the sick, in particular, and the population, in general.”

The Mauritanian foreign minister also expressed Nouakchott’s desire “to take full advantage of the experience of Morocco, which has brought the pandemic under control.”

Ismail ould Cheikh Ahmed also underlined “the strengthening of relations between Nouakchott and Rabat, since the arrival to power of President Mohamed Cheikh El Ghazouani, in August 2019,” highlighting the prospects for bolstering cooperation in many fields, including health, education, trade, etc. in accordance with the will of the two countries’ leaders.

As the Royal Air Maroc cargo plane landed in Nouakchott airport on Sunday, Mauritania said the aid comes at “a perfect timing,” and testifies to the strength of the “remarkable relations between the two countries and the two brotherly peoples.”

The office of the World Health Organization (WHO) in Mauritania also expressed pride and satisfaction with the Moroccan initiative.

The office said the Word Food Program and WHO logistics team will ensure the logistics and transportation of Morocco’s donation to Mauritania in medical supplies, while a sandstorm was blowing on Nouakchott.

“While the sandstorm is reaching its peak, our brave colleagues still have to ensure the logistics and transportation of Morocco’s donation to Mauritania in medical supplies,” the WHO office tweeted.

The permanent representatives of the beneficiary countries to the African union have also commended the initiative, which translates the significance of solidarity in Africa and materializes how “Africa helps Africa” as put by the Permanent Representative of the Comoros.

“We warmly welcome this Royal Initiative of very high significance to African countries,” Ndiaye told MAP, stressing that the age-old friendly relations between Morocco and Senegal are no longer to be demonstrated.

Senegal “warmly thanks HM the King and appreciates this noble gesture,” the diplomat said.

The King’s initiative is highly appreciated at the continental level, as it mirrors the firm and permanent commitment of the King and Morocco to Africa, Koe told MAP.

“This is an initiative that must be welcomed once again and we thank Morocco for the efforts it is making continuously for the benefit of the African continent,” said the PAP official.

The Royal Initiative is timely and highlights the values of sharing expertise and good practices, he said. “This testifies to and confirms the human aspect of the initiative, showing the way forward to strengthen the ties of cooperation and solidarity between African countries.”

The PAP official noted that Morocco had already anticipated the consequences of the coronavirus pandemic and that, under the King’s leadership, the Moroccan industry has been able to adapt to the new realities imposed by COVID-19.