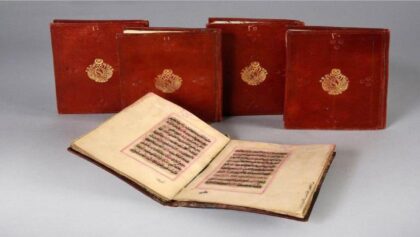 Tunisia has launched a probe into the theft of a lot of historical items shipped to France where they are to be sold at auction.

The 114 objects according to Mahfoudh were smuggled out of the North African country in the second half of March amid the covid-19 pandemic and are scheduled to be sold on June 11 at Paris-based Coutau-Bégarie auction house.

Tunisia in March imposed a lockdown and closed down its borders as part of efforts to curb the spread of covid-19 disease.

The artifacts include an ancient Quran, which belonged to Mohamed el-Moncef Bey, one of the last representatives of the Husseinite monarchy that ruled Tunisia from 1705 until its independence from France in 1957, the New Arab reports.

The stolen objects also include the original copy of a reference book on the Husseinite monarchy written by 19th century Tunisian historian and politician Ahmed ibn Abi Dhiaf; ceremonial apparel from the start of the 20th century; religious manuscripts; poetry books; and official correspondence.

“The authorities must do what is needed to stop this sale because these objects have a priceless value and are part of the country’s history,” said Mahfoudh.