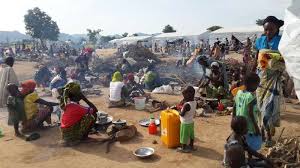 Over 50 jihadists on motorbikes launched a “well-planned operation” against the Intikane refugee camp in the Tahoua region, in Western Niger, at some 72 km from the Malian border.

The camp hosts some 20,000 refugees and an additional 15,000 displaced Niger nationals.

In addition to brutally killing the three men, the assailants torched stocks of relief items. They also destroyed mobile phone towers and the main water station and pipes, cutting communication and the water supply to the displaced population and their host communities, the UNHCR said in a statement.

Reports indicate that hundreds of people are on the run following the senseless murders and are heading to Telemces, a small village 27 kilometres from the site.

“The heinous and senseless act against vulnerable refugees and their hosts is heartbreaking and must be condemned in the strongest terms,” said Alessandra Morelli, UNHCR Representative in Niger. “By targeting refugees and cutting lifeline supplies, these armed groups are forcing vulnerable people to flee again, to leave from a place where they had found hope and where a careful balance had been built to allow solidarity with the local communities,” she adds.

UNHCR is working to support the survivors and is providing urgently needed assistance – for example organizing water delivery to make sure that refugees, internally displaced persons (IDPs) and host communities have water available for drinking and for hand washing, which is critical in preventing COVID-19 from spreading.

The past few months have seen a sharp increase in attacks in the Liptako Gourma region, where Burkina Faso, Mali and Niger share borders, forcing people living in the area to flee.

Despite violent attacks and insecurity severely limiting humanitarian access to those in need of protection and assitance, UNHCR is stepping up its response in Niger, focusing especially on providing shelter, education and programs to prevent and address sexual and gender-based violence. Niger also continues to demonstrate its commitment to protecting people fleeing violence.

UNHCR renews its urgent call on warring parties in the Sahel to protect civilians, people forced to flee and communities hosting them, as civilians are bearing the brunt of increasing attacks in Burkina Faso, Mali and Niger. In the past couple of months, refugee camps in Burkina Faso have been the target of attacks and incursion, forcing many to leave.