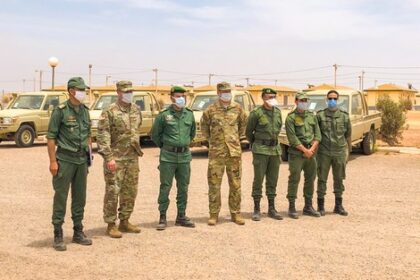 The operation is valued at $1 million, the release added.

The “Security Cooperation Office of the American Embassy and the Utah National Guard have established an exceptional relationship with the Moroccan special forces since the training began in 2017, through many joint annual exercises in Tafnit and other regions, thanks to a grant of $18 million,” the press release explained.

Colonel Abdel Rahim Maddah, Commander of the Southern District Training Center in Tafnit, met with the Defense Attaché of the US Embassy, Colonel Kenneth Cajon, to complete the handover, which aims to strengthen the ability of the Moroccan Special Forces to carry out special operations and internal command-and-control operations, by the end of this year.

“This handover is the culmination of a multi-year security cooperation project with Morocco,” said Colonel Cajon, adding that “the strong military ties between our two great countries will continue to grow in the coming years.”

«We are proud to partner with Morocco to develop the capabilities of the Moroccan Special Forces», US Ambassador David T. Fischer said, hailing “the professionalism, discipline, and dedication of the Moroccan Royal Armed Forces under the leadership of H.M. King Mohamed VI.”

The Moroccan Special Forces enjoy an excellent reputation thanks to the extensive experience they have gained through various exercises alongside various American Special Operations units.

Since 2003, the FAR and the National Guard of Utah have established close ties and sustainable relations, within the framework of the “Partnership with the State” program under the aegis of the US Department of Defense.