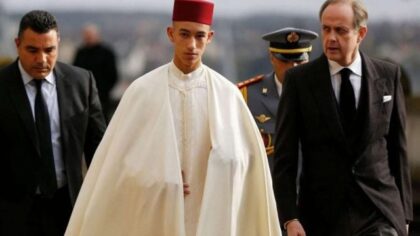 The Royal Family and the whole of the Moroccan people are celebrating this Friday, May 8, the 17th anniversary of Crown Prince Moulay El Hassan, a celebration that translates the strong ties binding the people and the Alawite throne.

This anniversary is an opportunity for Moroccans to cheerfully remember the birth of the first child of King Mohammed VI, baptized Moulay El Hassan, in tribute to the memory of his grandfather, the late king Hassan II.

This joyful event comes to embody, once again, the unwavering attachment of Moroccans to the Alawite Throne through the oath of allegiance, which unites them to the Sovereign, Amir Al Mouminine, defender of the faith and guarantor of supreme interests of the Nation and the citizens.

Moulay El Hassan was barely 11 years old when he began appearing alongside his father at public events and since his first official royal appearance in 2015, the Crown Prince has regularly represented the Moroccan royal family at inauguration ceremonies, diplomatic meetings, and international events.

In December 2017 at the age of 14, the prince was notably the youngest participant at the One Planet Summit in France, earning him international admiration. The summit moderator said then that his presence was a strong signal of young people’s engagement in defending the planet’s future.

In july 2019, he chaired, on behalf of King Mohammed VI, the official opening ceremony of two new terminals at Tanger Med, making of the infrastructure the largest container port in the Mediterranean.

The prince, who is studying aviation, is known to be intellectually gifted, speaking fluently Arabic, French, English, and Spanish. International media have praised the young prince for his maturity and ability to communicate with global leaders, as well as for his handsomeness.