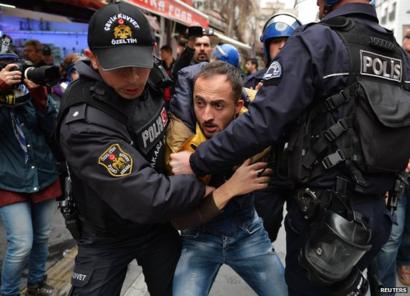 The Turkish police Monday broke a demonstration of Tunisians in front the North African country’s consulate in Istanbul as they demand to be repatriated home amid the fast spray of the coronavirus disease in their host country, Webdo Tunis reports.
The police, the online media says, used tear gas and arrested two protestors on the sidelines of the demonstration.
The Tunisian nationals according to one the demonstrators gathered in front of the mission to demand their repatriation. The source also indicated that several Tunisian families are have found themselves in difficult conditions and can neither work nor go back home.
There are roughly about 4,000 Tunisians still stranded abroad despite the repatriation campaign launched by authorities last months.
The demonstration also took place while Turkey strives to curb contamination from the disease which has already infected 61,049 people and killed as many as 1,296 according to the Turkish health ministry.