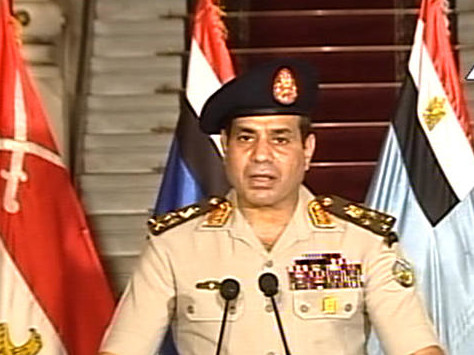 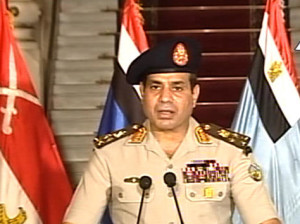 Egyptian army has ousted the country’s President Mohamed Morsi through “a coup” on Wednesday night, after he rejected the 48 hours deadline issued by the army to put the country back to order after numerous protests in Tahrir Square, and a nationwide unrest claiming many lives.
The leader of the Army General Abdel Fattah al-Sisi having religious leaders, military leaders and political figures by his side, announced in a television broadcast that the constitution will be suspended while the president of the Supreme Court Adli Mansour will serve as Egypt’s interim president and elections will be organized soon.
In a report by the BBC, General Sisi said in his television Address to Egyptians that President Morsi is no longer in office. He added that “Mr. Morsi had failed to meet the demands of the Egyptian people”. The general also said that “the military is fulfilling its historic responsibility to protect the country by ousting Mohamed Morsi”.
The location of the president is yet to be known, but reports from Al Jazeera suggests that he at the Republican Guard barracks in Cairo, surrounded by barbed wires and troops but it was not clear if he is under arrest or not.