Tunisia: One policeman killed & five others injured in terror blast near US embassy 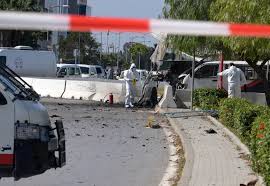 At least one security agent was killed and five others were wounded when two suicide bombers blew themselves up on Friday near the US embassy in the Tunisian capital.

The local authorities said the attackers, who were both on a motorcycle, died in the blast, which took place near the US embassy’s main gate.

Last summer, ISIS claimed responsibility for the terror attack that rocked the Tunisian capital. In 2012, the American embassy, located in the outskirts of Tunis, was attacked by crowds angered by an anti-Muslim film produced in the US.

Dozens of people have been killed in attacks by jihadists in Tunisia, notably in 2015 when the Bardo Museum outside the capital and a luxury beach hotel were attacked.

After the 2015 successive terror attacks, travel agencies had pulled out and foreign governments advised their citizens against travelling to the North African country, dealing a hard blow to Tunisia’s economy.

There are fears that Friday suicide-bombing might affect again the Tunisian tourism sector which employs nearly half a million people.