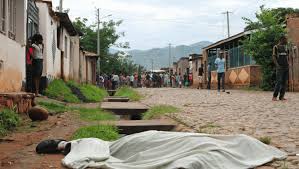 The Burundian government said on Tuesday it had killed at least 22 “wrongdoers” in what it described as violence linked to upcoming presidential election scheduled for May.

“The population should remain calm because security officers are ensuring its security.”

The authorities said two members of the police force were killed and six attackers were captured.

Burundi has been wracked by political violence since 2015, when President Pierre Nkurunziza ran for a disputed third term in office.

Hundreds were killed in a crackdown by security forces and more than 400,000 displaced, most to Tanzania, Rwanda, and the Democratic Republic of Congo.

This year election will choose a successor to President Pierre Nkurunziza.

In a report published last month, the Burundi Human Rights Initiative said CNL supporters had been beaten to death by members of the ruling party’s youth wing, the Imbonerakure, and buried in secret cemeteries.

“Serious human rights violations continued in 2019, but were often hidden and quickly covered up, making it difficult to establish the circumstances in which they took place,” the report said.

The United Nations has warned that human rights abuses may increase again before the elections scheduled for May.