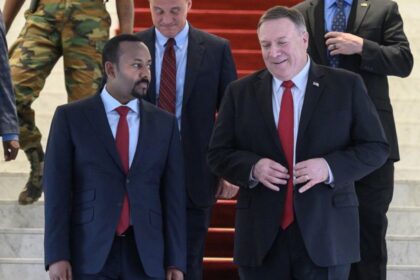 The United States will provide financial assistance to Ethiopia as it pursues political reforms, the office of Ethiopian Prime Minister Abiy Ahmed said in a statement on Tuesday, following the US Secretary of State Mike Pompeo visit in the country.

“An agreement has been reached regarding the strengthening of the holistic and ongoing reform in Ethiopia to which the United States Government plans to provide substantial financial support,” the statement said.

Ethiopia, a key US security ally in the Horn of Africa, has undergone dramatic political reforms since Nobel Peace Prize-winner PM Abiy Ahmed took office in 2018.

Mike Pompeo praised political reforms Abiy has spearheaded ahead of Ethiopia’s upcoming elections. Ethiopians are due to vote on Aug. 29 in a balllot Abiy has promised will be free and fair in a bold break from decades of repression.

“A free and credible vote will show that there is no false choice between democracy and security and it will ensure that everyone has a choice,” Pompeo told reporters.

However, the loosening of repressive measures has been exploited by some with long-held grievances, leading sometimes to violent ethnic tensions that threaten the August polls.

Ethiopia is Pompeo’s last stop on his tour of Africa before he moves on to the Middle East.