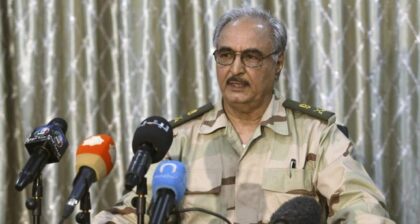 A US law firm representing six Libyan families has filed a lawsuit against retired Gen. Khalifa Haftar for war crimes in Libya where relatives of the plaintiffs were allegedly “murdered”.

Martin F. McMahon & Associates said in a press release having lodged complaint in the Federal District Court of the District of Columbia against Haftar. His army’s operations affected the families whose “relatives were murdered, injured or faced attempted killings,” the law firm said, Anadolu news agency reports.

“By filing the lawsuit in Washington, the plaintiffs will bring to light the serious human rights abuses, extrajudicial killings and torture which the defendants have engaged in with absolute impunity and without fear of accountability,” said the release.

Haftar is “not just a war criminal, but also a US citizen with assets and family members” in the US and “he can and will be held accountable for his illegal and barbaric acts.”

The families are seeking $1 billion in reparation, the law firm also indicated.
Haftar has launched since April an offensive to seize Libyan capital Tripoli from UN-backed Government of National Accord (GNA). The fightings which have been raging in the outskirts of the Libyan capital have killed over 1,000 people and injured thousands of people according to the World Health Organization.

The offensive has been condemned by the UN which has managed in vain last week to snatch a cease-fire between the two sides following Jan. 19 Berlin conference. A first truce brokered by Russia and Turkey in January has failed to materialize.