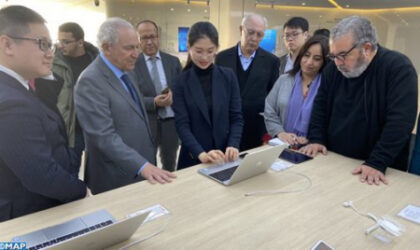 The Chinese multinational telecommunications equipment and services company Huawei is ready to cooperate with its Moroccan partners to launch the 5G network, Huawei vice-president for North-Africa, Philippe Wang, said Monday in Beijing.

Philippe Wang who was talking to a Moroccan delegation on a visit to a Huawei service center in Beijing said his company was a major partner in digital transition with all key players in the telecommunications field in Morocco, such as “Inwi”,”Maroc Telecom” and “Orange”. This partnership seeks to provide solutions and develop telecommunications services, he said.

Huawei is ready to work with these partners to launch the 5G network in Morocco, he added, underlining the group’s willingness to work along with Morocco to accompany its efforts to become a leading center in the high-tech sector.

Wang also recalled the signing by the company of cooperation agreements with eight Moroccan universities for the training of 12,000 students over a three-year period, and the launch of the program “Seeds for the Future” which enables each year 10 Moroccan students to benefit from a month-long stay in Chinese universities and Huawei Technologies laboratories in the city of Shenzhen.

The group is also cooperating with several other Moroccan partners, including the National Railway Office (ONCF) to which Huawei provides the technologies necessary for the high-speed line communication services through the GSM-R network, he said, expressing his group’s pride to have participated in this great project.

The Huawei official also underlined that Morocco has several assets that can make of it a digital hub in the African continent, mentioning in this vein the country’s political stability, economic development and advanced infrastructure, in addition to human skills, cultural diversity and language proficiency.

In order to establish itself as a leading hub in the field of digital technologies on the African continent, Morocco needs, however, to encourage foreign direct investments in the sector, speed-up digital transformation in the industrial fields and promote new technologies to open up job opportunities, in addition to developing innovation capacities and skills, the Huawei official was quoted by MAP as saying.

Huawei entered the Moroccan market in 1999 and set up its headquarters in Rabat. In 2018, it opened a regional center in Casablanca that covers the North African region.