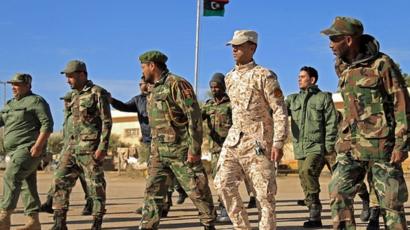 The self-proclaimed Libyan National Army, LNA, headed by rebel General Khalifa Haftar, said Monday they took control of the coastal city of Sirte, hometown of former leader Muammar Gaddafi, from the forces of the UN-backed Government of National Accord (GNA).

LNA spokesman Khaled al-Mahjoub said Haftar forces captured “all the districts surrounding the city”, including al-Qardabiya airbase and were heading to the city center.

GNA backed forces, with the support of US air power, had dislodged Islamic state group in 2016 after the city fell into the hands of the terror group in 2014.

The seizure of Sirte marks a shift in Haftar’s efforts to seize capital Tripoli. He launched in April the Libyan capital seizure operation but has met tough resistance.

The shift in focus from Tripoli occurs as Turkey announced Monday the beginning of its forces deployment to prop up the GNA in the framework of a November maritime and security agreement signed between the GNA and Ankara.

“Our soldiers’ duty there is coordination. They will develop the operation center there. Our soldiers are being sent gradually right now,” he said.

The Turkish President indicated that Turkish forces will be deployed at battle fronts against Haftar.

“Right now, we will have different units serving as a combatant force,” he said.

Concern is rising over further foreign intervention, with the rival administration in the east reportedly receiving backing from several countries including the United Arab Emirates, Egypt, Jordan and Russia.

In a statement on Friday, the UN Secretary General Antonio Guterres warned that “any foreign support to the warring parties will only deepen the ongoing conflict and further complicate efforts to reach a peaceful and comprehensive political solution” in Libya.