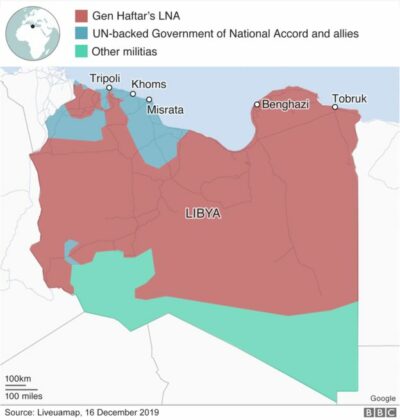 Turkey started deploying troops in support of the UN-backed government in Tripoli under attack from renegade general Khalifa Haftar openly backed by UAE and Egypt.

The deployment of Turkish soldiers has been announced on Sunday by president Erdogan in an interview saying the measure aims to ensure the stability of the internationally-recognized government of National Accord, GNA, under attack by a “warlord”.

“Our soldiers’ duty there is co-ordination. They will develop the operation center there. Our soldiers are gradually going right now,” President Erdogan told the CNN Turk TV channel.

Turkish troops on Libyan ground signal a dangerous turn in the proxy war that has engulfed the oil-rich North African state.

“There will be an operation center, there will be a Turkish lieutenant-general leading and they will be managing the situation over there,” Erdogan said without offering details on the scale of the deployment.

Analysts already warned that Turkey might have sent Syrian militias who have spearheaded three previous Turkish operations in their home country as manpower.

On the other Hand, Haftar, whose forces control much of the country is backed by regional rivals of the Turks, the UAE and Egypt who supplied him with drones and other weapons.

President Donald Trump of the US last week warned Erdogan that “foreign interference is complicating the situation” in Libya.

In a sign of the worsening situation, at least 30 people were killed and 33 wounded, many of them military cadets, in a missile strike this weekend on a military academy in Tripoli.

The Turkish overt intervention in Libya comes amid disagreements with a number of eastern Mediterranean countries over demarcation of sea borders.

Turkey sees in its military presence in Libya a means to reassert its power after it recently found itself pitted against an emerging coalition of old and new adversaries across the East Mediterranean, mainly Cyprus, Egypt, Greece, and Israel. Ankara is alarmed by the rate at which they have come together in strategic cooperation, including joint diplomatic, energy, and military initiatives.

Egypt opened talks with Greece to delineate their maritime economic areas. They then held a three-way summit in November 2014 to promote a deal for supplying natural gas to Egypt from undersea fields off the coast of Cyprus. Cairo also hosted the inaugural meeting of the East Mediterranean Gas Forum earlier this year, notably excluding Turkey.

Ankara’s agreement with Tripoli in November was forged in part to counter such cooperation. The accord established a virtual maritime axis between Dalaman on Turkey’s southwest coast and Darnah on Libya’s northeast coast. For Turkey, drawing this line will allow it to cut into the emerging Cypriot-Egyptian-Greek-Israeli maritime bloc, while simultaneously pushing back against Egypt and the UAE’s pressure on the Tripoli government.