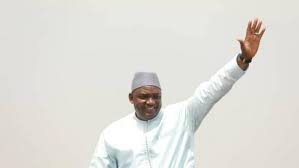 Gambian President Adama Barrow has launched his own political party in capital Banjul.

The move frees him from the coalition that helped him win the presidency three years ago in the West African nation.

The president has formally registered the new party, the National People’s Party (NPP), with the Independent Electoral Commission, making him the leader and secretary of the party.

The announcement comes as relations between Barrow and his former party, the country’s largest, the United Democratic Party (UDP), have deteriorated. He fired party leader Ousainou Darboe over differences in 2019.

Darboe was a key member of the opposition coalition that beat long-serving Yahya Jammeh in December 2016 polls. At the time, the coalition picked Barrow as a candidate because Darboe was imprisoned.

He was released days after Jammeh was declared the loser of the polls. He was later appointed Foreign Affairs Minister, a post he held till June 2018 when Barrow appointed him Vice President.

Last May, Adama Barrow announced his wish to go through with his presidential term, scheduled for 2021. Part of the political coalition, which brought him to power, accepted this principle, with the notable exception of UDP.

For the UDP, Adama Barrow does not respect his initial commitment to organize a new presidential election in late 2019, a poll in which he is not supposed to participate.