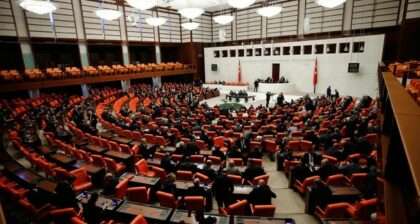 Turkey’s parliament Thursday approved Ankara’s plans to send troops to Libya at the request of the UN-backed Government of National Accord (GNA), which has been struggling to overcome a military takeover by forces of retired General Khalifa Haftar, backed by Egypt, UAE and Russia.

The resolution was approved by 325 out of 509 parliamentarians. The text states that developments in Libya pose a threat to the region and asks for permission to deploy Turkish forces to foreign countries to intervene in conflicts outside the borders of Turkey for a period of one year, Daily Sabah reports.

The resolution was prepared last week after the GNA officially requested Turkey’s military intervention late last month in view of countering the ongoing military offensive by Haftar forces to seize the Libyan capital over allegation that the GNA is controlled by militias and terror groups.

The request by the GNA came in the framework of Nov.27 security and maritime agreement between the GNA and Ankara.

Under the security aspect, the deal allows Turkey to provide military training and equipment at the request of the Libyan government.

The agreement met with several rejections including the Arab League, Greece and Israel.

The mandate given Thursday will allow Turkey to help the GNA also combat Daesh, al-Qaida and other terrorist organizations or illegal armed groups as well as illegal migration and human trafficking. Turkish soldiers will deliver humanitarian aid to the Libyan people and protect and defend Turkey’s threatened interests, the resolution states.