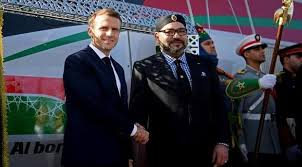 French President Emmanuel Macron is expected to pay a two-day visit to Morocco on February 12-13 next year.

The date of the visit was confirmed this Thursday by French Secretary of state to the French Ministry of Foreign Affairs, Jean Baptiste Lemoyne, in a statement to Moroccan TV channel 2M, following a meeting with Morocco’s Junior Foreign Minister Mohcine Jazouli.

Macron is expected to meet with King Mohammed VI and senior Moroccan officials during his visit to the North African country.

The confirmation comes days after several press reports indicated that President Macron, who had postponed a trip to the Kingdom several times this year, would visit Morocco early next year.

This will be Macron’s second visit to Morocco after his first official trip in November 2018, when he inaugurated, alongside King Mohammed VI, the Tangier-Casablanca high-speed train. The two leaders had then made a Tangier-Rabat journey aboard the train.

The announcement of the visit coincides with the holding in Paris of the high-level Moroccan-French meeting and comes few days after the fourth French-Moroccan Parliamentary Forum convened in the French capital.

Some press reports suggested lately that relations between Paris and Rabat have become strained over the remarks made by French economy minister Bruno Le Maire who is pushing for the “relocation” in France of French automobile plants abroad, including those of Renault and PSA in Morocco.

Others say the Marrakech-Agadir high-speed rail line project eyed by the French firms is behind the tension between the two countries, friends and allies touting an “exceptional strong multiform” partnership.

However, a diplomatic source cited by local media outlet, Media24, denied rumors of a tension between Paris and Rabat.