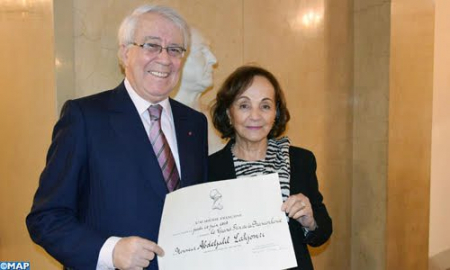 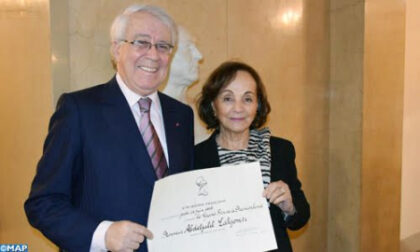 Perpetual Secretary of the Academy of the Kingdom of Morocco, Abdeljalil Lahjomri, was handed Thursday at a ceremony in Paris Le Grand Prix de la Francophonie awarded by the French Academy.

The prize, part of the 2019 list of 64 prizes and medals granted by l’Académie Française, was handed to Mr. Lahjomri during a ceremony chaired by Ms. Hélène Carrère d’Encausse, Perpetual Secretary of the French Academy, alongside Alain Finkielkraut and Florence Delay, members of the institution.

Through this award, the French Academy pays tribute to Mr. Lahjomri, who has contributed to the promotion of the French language, said Mrs. Florence Delay, while presenting the names of the 64 recipients of the 2019 awards.

“The Grand Prix of the Francophonie crowns the work of a personality who, in his country or at the international level, has made an important contribution to maintaining and illustrating the French language,” she underlined.

The 40-member French Academy chooses the winners of its distinctions on merit, without any application submissions, on the basis of their academic performance.

Lahjomri told MAP on the sidelines of the ceremony that he dedicates this Prize to the Academy of the Kingdom of Morocco, as well as to all the teachers, deans and university rectors who are currently working on the educational reform. This important reform would contribute to the modernization of Morocco, he said.

Following the announcement last June that the Moroccan intellectual is the winner of Le Grand Prix de la Francophonie, King Mohammed VI had sent him a congratulatory message.

The Monarch had underlined that the awarding of this prestigious Prize to Lahjomri is a recognition by this French institution of the valuable works and research he has accomplished, as well as of his efforts at the head of the Academy of the Kingdom of Morocco to enshrine the values of dialogue, living-together and understanding between cultures and civilizations.

This award also reflects the high esteem enjoyed by Moroccan genius and scientific skills at the international level, King Mohammed VI had said in his message.

The French Academy, founded in 1635, is an assembly of 40 members elected for life. These 40 ‘Academicians’, a term specific to the Academy, carry the name of ‘Immortals’ as death is the only way they lose their title.

The Academy is the guardian institution of the French language and is entrusted with updating the French dictionary. It is composed of poets, novelists, playwrights, literary critics, philosophers, historians, scientists, and, by tradition, high-ranking military men, statesmen, and religious leaders, who have “all particularly illustrated the French language.”