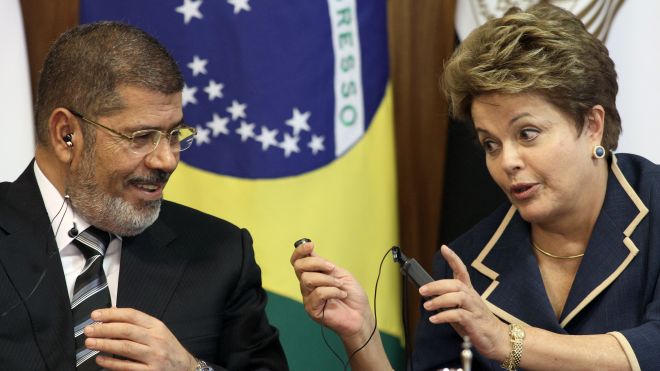 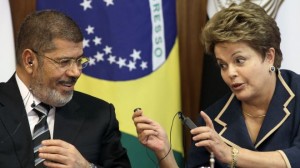 President Mohamed Morsy is currently on a working visit to Brazil and has urged its businessmen to invest in Egypt in order to increase trade between the two countries.

Egypt is the biggest trading partner of the Latin American country in Africa and transactions between them have always been on the rise for more than a decade. The Egyptian president also hoped that they will be able to benefit from Brazil’s experience to overcome the challenges he’s faced within his country. In a statement released by the President shortly after his meeting with the Brazilian president, Dilma Rousseff, Morsy stated that they “want to increase trade” between them and “want more Brazilian investors to invest in Egypt.” It can be recalled that most of the investors are waiting on the negotiations with the International Monetary Fund to be concluded before they can take any further steps in Egypt.

Bilateral trade between Egypt and Brazil stood at $419 million in 2002. Ten years later, the figures sky-rocketed to more than $2.96 billion. Morsy is scheduled to visit Sao Paulo where he will meet with Brazilian businessmen, many of whom have said they are interested in investing in transportation and energy projects in Egypt. Cairo is interested in learning about Brazil’s experience in developing bio-fuels such a sugarcane-based ethanol. Egypt is undergoing energy shortages due to excessive high demands and the government is finding it difficult support the charges.

President Morsy is also interested in Brazil’s efforts in reducing poverty, promoting social development programs and democratization. He thinks that the Latin American country “could help Egypt achieve social justice.” He said that “Egypt has a lot of potential that Brazil can help us exploit.”