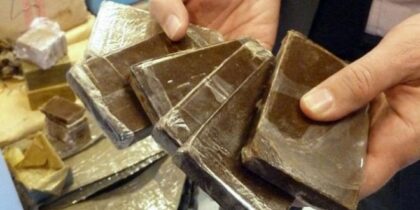 The suspects, aged between 19 and 45 were accompanied with a five-year-old child, according to a statement from the General Directorate of National Security (DGSN).

The women were arrested in possession of 6.485 kg of cannabis resin, carefully concealed in their belts. They were nabbed while they were preparing to leave the Moroccan tourist resort of Marrakech on a flight bound for Tunis.

It is the second time during this month that airport police are arresting Tunisian women for drug trafficking. The first operation took place at Casablanca’s international airport on November 8.

Two Tunisian women were then arrested in possession of nearly 12 kg of cannabis resin.

The operations are part of Morocco’s strategy to fight drug trafficking and cross border crimes.
According to official figures, the DGSN seized 112 tons and 138 kg of cannabis and its derivatives from January 1 to September 15, this year.

Despite efforts made to crack down on cannabis cultivation over the past decade, Morocco remains one of the world’s largest producers of the narcotic plant, according to the United Nation’s Office on Drugs and Crime.