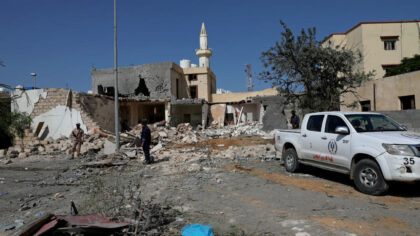 Jordan, Turkey and the United Arab Emirates have violated the arms embargo imposed on Libya since 2011, according to a confidential report by UN experts in charge of its control, deploring the intensification in the country of a “conflict by proxy”.

“The UAE, Jordan and Turkey have provided weapons on a regular and sometimes flagrant basis, without really trying to hide their origin,” the experts point out in a summary of their report.

According to diplomats, Jordan is accused in particular of having trained troops of Marshal Khalifa Haftar, the strongman from the Libyan East who launched a military offensive in April to seize Tripoli.

The UAE, another support of the Marshal, is suspected of having used bombers for the benefit of his troops.This country could be involved in the bombing of a migrant detention center in the suburbs of Tripoli on July 2, which killed some 50 people. But the report, while it speaks of the “probable” involvement of a foreign aircraft, does not provide a definitive answer, generally referring to the use of American-made F-16s and French-made Mirage 2000-9s, two types of aircraft equipping the Emirates Air Force.

Turkey, for its part, which has openly supported Prime Minister Fayez al-Sarraj’s government, has provided equipment to its troops, ranging from armored vehicles to drones, according to the same diplomatic sources.

The report also points out that migrant smuggling, “even if it is considerably reduced”, “continues to finance networks that contribute to instability”. The UN experts also denounce “four attempts” by the National Oil Corporation in the east of the country to “illegally export crude oil”. “Refined products continue to be diverted by sea and land, but at a lower level than in previous years,” according to the UN experts.