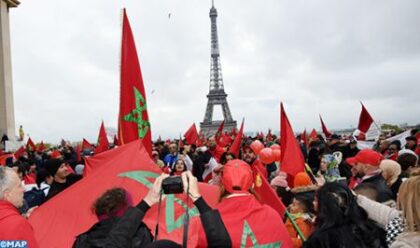 A march by Moroccans living in Europe dwarfed a previous march by a bunch of separatist agents who burned the Moroccan flag igniting the indignation of Moroccans from the northern Rif to the southern Sahara provinces.

The hundreds of Moroccans waving the Kingdom’s red and green flags gathered in Trocadero square in Paris to celebrate national unity and denounce the burning of the Moroccan flag late October by an agent with a separatist agenda in northern Morocco.

The Sunday march was also meant to mark the 44th anniversary of the Green March following which Morocco regained its southern provinces from the yoke of Spanish colonialism.

Besides France, the participants came from Germany, the Netherlands and Belgium to express the attachment of the Moroccan diaspora to the symbols and values of their motherland.

They chanted slogans including the Kingdom’s motto “God, the homeland and the King” and waved Moroccan flags and placards expressing strong patriotism and readiness to stand by the nation whenever it needs them.

Moroccans living in Europe are estimated at more than 5 million people mostly living in Schengen countries notably in France, Spain, Italy, Belgium, the Netherlands and Germany.

The Moroccan diaspora is very attached to their homeland as evidenced by the summer car crossing with 3 million people this year visiting their homeland.

Their remittances are key to Morocco’s international reserves as they are also reflective of their significant contribution to develop their homeland economy.

Morocco has created a special council to assist the Moroccans living abroad and a ministerial department in charge of the Moroccans abroad.