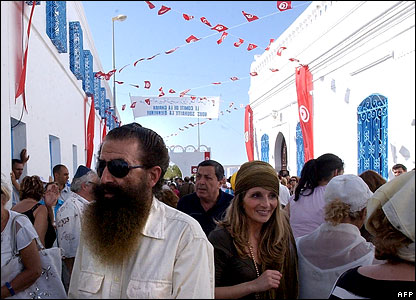 Tunisian Jews on a pilgrimage 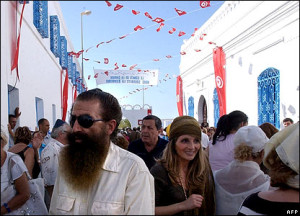 Tunisian Jews and others from around the world are getting ready for the pilgrimage, beginning on Friday, to the El Ghriba Synagogue for their annual festivities, to celebrate the end of Passover. The synagogue is on the island of Djerba and it’s considered to be the oldest in Africa. The pilgrimage to the island has become a tradition.
Pilgrims have already started arriving from outside Tunisia for the event which will be held over the weekend. Locals consider it to be a sign of religious tolerance and coexistence between Muslims and Jews despite the rising Salafist turbulence in the country. Last year, Tunisian President Moncef Marzouki visited El Ghriba during Passover and emphasized the importance of the Jewish community to Tunisian society.
According to Rene Trabelsi, an organizer of the El Ghriba pilgrimage and owner of Royal First travel agency, the buildup has been smooth and “preparations are going really well and the atmosphere is joyful.” Most of the pilgrims will be coming from France. To make the event successful, the Sidi Mansour hotel in Djerba will become a kosher establishment for the coming days. However, Israelites are likely not to be among the pilgrims, after their government warned its citizens against traveling to Tunisia for the event, but two Tunisians from Israel will be making the trip to the island. The latest attack on the event took place in 2002 and it left 21 people dead. Since then, it has always been held under tight security.
The tourism minister, Jamal Gamra, visited the synagogue at the beginning of the month in a bid to give assurances to the pilgrims after many feared that the Islamic led coalition government will take strict measures against other religions.