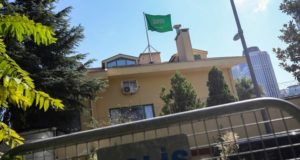 The Arab Media House in Turkey is mulling plans to buy the Saudi consulate compound in Istanbul where Saudi journalist Jamal Khashoggi was killed and decapitated and convert the premises into a museum to honor his life and work.

“We need to raise awareness and show respect for Jamal’s journalism. Journalists need institutions across the world to take action so that journalists around the world are not subjected to such atrocities,” he was quoted by the New Arab as saying.

“If we don’t, the world will see more atrocities against journalists,” Kaslakci warned.

Khashoggi was executed and butchered on October 2, 2018 as he entered the consulate to acquire documents to marry his Turkish fiancée.

Saudi authorities have acknowledge the death of the Washington Post journalist. Crown Prince Mohamed bin Salman in an interview to US media CBS admitted responsibility for the murder because he said it “happened under his watch.” The Saudi de facto leader however denied any direct connection with ugly execution.

According to earlier press reports, Saudi Arabia has ‘secretly’ sold its four-story consulate building in Istanbul to an unknown buyer for third of the market price.

The consulate staff are expected to use new facilities next to the US embassy in the city.