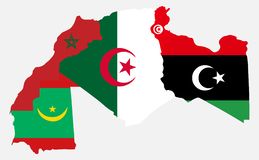 The Maghreb, a region at a crossroad

The Maghreb region extending from Libya to Morocco is one of the most unstable and least integrated regions in Africa and probably in the world. The uncertainty facing many countries in the region is raising a bunch of questions regarding the stability of the Mediterranean region. A divided Libya continues to undermine regional security while the governance vacuum in Algeria and the ongoing protest there cast a shadow on the region’s stability. Meanwhile, Morocco is looking for a new development model to curb disparities and reduce unemployment while Tunisia faces a test to its nascent democracy in an election that put forward two new contending political leaders at a context the country is facing an acute economic and financial crisis.

Prospects for a political solution to the infighting in Libya have been destroyed after Haftar’s forces launched their attack on Tripoli with help from the UAE and Egypt. Libya’s preparations for elections under Skhirate agreement are now a distant past. The country has become a safe heaven for terrorist groups and all sort of cross-border traffickers and criminal gangs.

Political violence will continue to plague the country as Turkey and Qatar put their full weight behind the UN-recognized government in thwarting the attack by the eastern administration loyal to Haftar. The infighting will worsen the security vacuum in Libya despite steady oil revenues. Insecurity in Libya has spilled over to neighboring Tunisia.

The country has turned into a battle ground for a proxy war involving Turkey and Qatar on one side and the UAE and Egypt on the other side.

Hailed as a success story in the post-Arab Spring saga, Tunisia faces a test to its young democracy as the political class has to accept the results of the free elections even if the winner has unconventional stands.

What some started to call “Tunisian populism” can be understood as a fallout of the post-revolution frustrations with the state of the economy.

While Karoui is running his electoral campaign for the second round from prison as he faces charges of tax evasions, he projects an image of a wealthy populist with close ties to Silvio Berlusconi. Saied follows an opposite model with no money or party.

Whether other political rivals will accept the result of the elections is putting the Tunisian democracy into a real test. Some analysts think that current PM and contender for the Presidency Youssef Chahed and his party might not accept the election results. He was accused of sending Karoui to prison to reduce his chances in the first round. Now, many believe that Chahed fears that if Karoui gets elected, he would use the judiciary to prosecute him on corruption charges.

Political uncertainty comes amid dim economic prospects. The country has been struggling to revitalize its economy, lower inflation and unemployment since the 2011 revolution with little success.

Recently, Algeria’s kingmaker general Gaid Salah banned busses from carrying protesters to the capital in a move that could lead to a more violent crackdown.

Elections have been rescheduled for next December but protests continue pressing for a radical break with an old elite perceived as corrupt and inefficient.

But the grassroots protests have shown no sign of waning, demanding constitutional changes and other reforms before a legitimate election can be held.

Despite the crackdown, thousands continue to mass on Tuesdays and Fridays in Algiers and other cities demanding the cancellation of the December vote and calling for key regime figures to step down first.

Some analysts see that the worst is yet to come in Algeria as the country continues lavish spending despite dwindling reserves. Lifting the generous subsidies on foodstuff and other social sectors will be inevitable as Algeria heads towards international debt. Such a measure would infuriate protesters and cause a surge of unrest across the country.

An analyst of the Carnegie Middle East Center thinks that the People’s National Army (PNA), which has a special status under the Constitution and which defended the political order established in 1962, may “capitalize on the current situation and the new power configuration to regain the role it had lost under the former president.”

“The PNA will most likely continue to act behind a façade of constitutionalism and pluralism while maintaining its hold on power,” the analyst argues.

Morocco, the only stable country in North Africa, is revising its development model to curb disparities. As King Mohammed VI said in his speech in late July, the significant development in infrastructure has not benefited all and more work remains to be done to curb unemployment and develop rural areas.

The country has faced protests in recent years over social and economic issues in the region of Rif and Jerada and over water scarcity in the South.

At the political level, the ineffectiveness of the political class has come at a high cost. The country is bracing for a political reshuffle but it remains better off compared to many countries in the region.

Morocco is facing migration pressure as it undertakes efforts to curb illegal migration to Europe, putting a strain on the county’s budget. The EU has offered €140 million to help Morocco stem the flow of migrants especially from Sub-Saharan Africa.

The North African Kingdom is also advocating integration in the Maghreb region calling on Algeria to open borders to facilitate trade. Such calls have fallen on deaf ears in Algeria.

In the midst of a very weak regional integration and cross-border cooperation to tackle the security risk, the Maghreb remains unable to address security and economic challenges by itself. This further weakens the five Maghreb states in international negotiations and exposes the most unstable countries to foreign influence and intervention. The case of Libya is a salient example of a state whose soil is now a battle ground of a proxy war.

The challenge ahead for North African governments is to overcome political stalemate and narrow rivalries to address the strategic challenges that will shape their countries for decades to come.