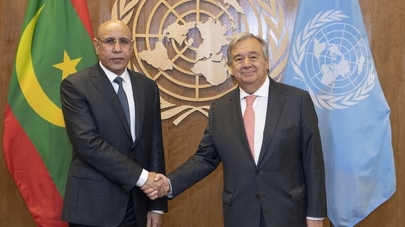 The “serious and credible” autonomy plan offered by Morocco for the resolution of the Sahara regional conflict is gaining a growing international acclaim, while the Algeria-backed Polisario separatist group continues to suffer more diplomatic setbacks as separatism is crumbling giving way to global cooperation and regional integration.

The secessionists and their Algerian supporters were deeply crushed and upset when the Head of Spanish Govt Pedro Sanchez brushed aside, for the first time, the self-determination referendum from his speech at the 74th session of the UN General Assembly, convening in New York.

At the same international venue, the Polisario-Algeria duo received another damaging blow from Mauritania when president Mohamed Oud El Ghazouani has not made any reference to the Sahara conflict in his speech at the UN.

The Head of Spanish Govt, the socialist Pedro Sanchez, defended the exclusive role of the United Nations in handling the Sahara issue, voicing his country’ readiness to contribute to the efforts made by the UN Secretary-General to achieve “a just, lasting and mutually acceptable political solution” to the Sahara conflict in accordance with Security Council resolutions.

He excluded the African Union from mediating or meddling in the Sahara issue, while the Polisario and the Algerian authorities are desperately pushing the AU to get involved but to no avail.

In his first speech at the UN General Assembly, the Mauritanian president did not utter a word on the Sahara issue, irking the Polisario leadership and the Algerian regime.

He, on the contrary, reiterated his country’s support to the Palestinian people’s legitimate struggle against the Israeli illegal occupation and their rights to establish an independent State with East Jerusalem as its capital. President Ould El Ghazouani also tackled the situation in Libya, saying Nouakchott backs international efforts seeking to protect Libya’s territorial integrity and sovereignty and to restore peace.

Regarding Syria, he stressed the importance of reaching a political settlement that ensures dignity of its people. He also voiced his country’s stand on the situation in Yemen and South Sudan but no words on the Sahara.

According to some experts, the neutral stand of President Ould El Ghazouani is not a surprise as he had already showed some signs of a shift in relations with the Polisario during his presidential campaign.

During his election campaign, Ould Ghazouani, a former defense minister, implicitly showed his colors on the Sahara when he told his supporters that if he were elected president, he would not “grant Mauritanian nationality to the Sahrawis living in Tindouf or elsewhere.”

He even described as “a betrayal” the naturalization of the Sahrawis of the Tindouf camps, Southern Algeria.

For his part, his predecessor, Mohamed Ould Abdel Aziz, had told online newspaper Arai Al Yaoum (April 11, 2019) that “the United States, Europe and the West do not want a state placed between Morocco and Mauritania”.

Brahim Ghali even extended his stay in Nouakchott hoping to be received by Ghazouani; but tired with waiting he returned to the Tindouf camps empty-handed.