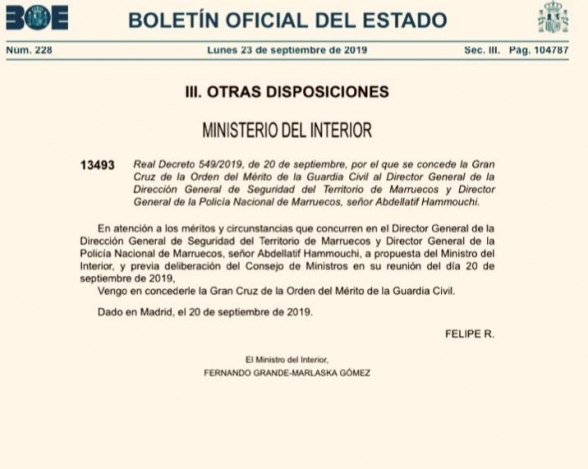 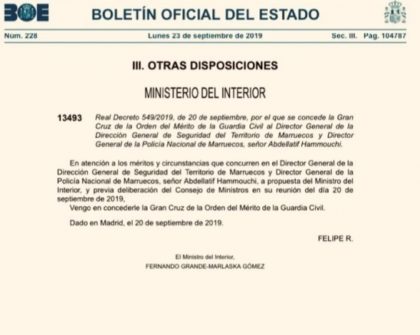 The head of Morocco’s internal security Abdellatif Hammouchi and the Commmander of the Royal gendarmerie Lieutenant General Mohamed Haramou, were decorated in Spain.

A royal decree published in Spain’s Official Gazette bestows on the Moroccan officials the Grand Cross of the Order of Merit of the Spanish Civil Guard.

The distinction awarding was endorsed Saturday, September 20, at the Council of Ministers, chaired by King Felipe VI of Spain.

The Council of ministers approved the distinction, the highest decoration of the Civil guard institution, on the proposal of Interior minister, Fernando Grande-Marlaska, in recognition of the exemplary security cooperation between Morocco and Spain.

Abdellatif Hammouchi, the head of the national and territorial security (DGST & DGSN) had already been decorated by Spain in 2014 with the “Honorary Cross of Police Merit with Red Distinction”, one of the highest honors awarded to foreign personalities.

Abdellatif Hammouchi, who also heads the kingdom’s powerful FBI-style Central Bureau of judiciary investigation (BCIJ), was nominated in April this year by the Paris-based Pan-African weekly magazine Jeune Afrique among the top 100 most influential Africans.

Abdellatif Hammouchi featured in the ranking for his outstanding achievements in the fight against terrorism, at home and internationally.

Jeune Afrique, which dubbed him “the nightmare of terrorists”, had recalled that Hammouchi received accolades from Africa, Europe and as far as Asia as he had helped Sri Lankan authorities identify the terrorists involved in the attacks on hotels and churches on Easter Sunday.

The magazine had also stresses that Abdellatif Hammouchi managed to reconcile the citizens with their police, as he introduced a fundamental change of minds and new ethics to bring the police closer to citizens.