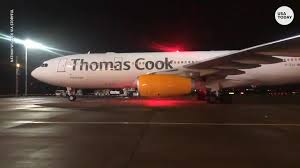 As soon as the news of the collapse of British travel group Thomas cook broke out, Moroccan tourism authorities set up on Monday a crisis cell to contain the fallout from the failure of the 178-year old Tour operator.

The crisis unit includes representatives from the ministry of tourism, hotel industry, travel agents and Moroccan national office of tourism. The goal is to coordinate actions, monitor and supervise the repatriation of thousands of Thomas Cook customers from Europe

The collapse of Thomas Cook is the biggest failure to date of a UK package holiday company. It leaves around 600,000 holidaymakers, including 150,000 British, stranded abroad – and many more with useless holiday bookings.

In Morocco, the number of Thomas Cook clients is estimated between 1,300 and 1,500 tourists, mostly Britons while the others are from France, Belgium, Germany and Netherlands.

According to the local press, their repatriation from Morocco, to be phased out in four stages, will span from Sept.25 to Oct.5. Thomas Cook planes used to transport annually 2, 500 British holidaymakers from Manchester to Marrakesh. As the rest of the world, Moroccan hotels and tourism will be hit by the collapse of this giant global TO.

The international repatriation plan of its customers worldwide has already started and will involve planes chartered from other airlines including British Airways and EasyJet.

Codenamed Operation Matterhorn, the repatriation of Thomas Cook travelers is the biggest ever by the UK government in peacetime. It will be a mammoth challenge for the British civil aviation authority on a scale significantly larger than the last major collapse, when Monarch Airlines was grounded in October 2017.