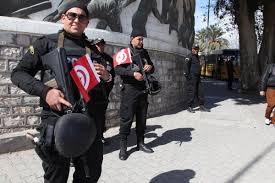 The Tunisian interior ministry said it has nabbed four men forming a terror cell suspected for being linked to last week stabbing of security officer, in the southwestern Tozeur province.

The cell members have confessed to have planned terror attacks against police establishments and key sites, the interior ministry said, adding that the men had pledged allegiance to the Islamic state group, ISIS.

The suspects have been arrested as part of investigations following a stabbing attack last week on a security force on duty in Tozeur governorate. The security officer was guarding the Subsidiary Body for Elections headquarters.

Authorities had arrested the suspect but had not revealed the motive behind the attack that occurred amid the electoral campaign for the September 15 snap presidential elections.

Tunisians will head to the polls next Sunday to elect a new leader after the death of President Beji Caid Essebsi late July, while in office.

The vote will kick off on September 13 in six overseas election constituencies, to enable Tunisian expatriates to cast their votes.