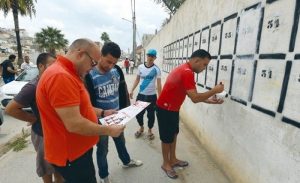 The European Union will send 100 observers for September snap presidential elections and October parliamentary polls at the demand of the Tunisian government and the electoral commission.

The observers will monitor the electoral process, campaigns, the voting process and will make recommendations for the following election, Marie-Violette César, deputy Chief of the EU mission in Tunisia in charge of the legislative and presidential election told the media a press conference Wednesday.

38 of the observers’ team are already in the North African country. 28 of those present arrived Monday while, the rest, all of electoral analysts have been around since August 23, local online media webdo.tn reports.

Tunisians will elect a new leader on September 15 after the death of former President Caid Essebsi who passed away late July while in office. The presidential elections were due to take place in November after the legislatives slated for October.

The electoral commission, ISIE, has ticked out 26 candidates including Prime Minister Youssef Chahed, touted as one of the major contenders.