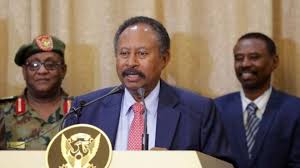 Sudan needs up to $10 billion in aid—PM

Sudan’s new prime minister said the East African nation needs about $8 billion in foreign aid over the next two years to cover its import bill and help rebuild the country’s economy, ravaged by months of political turmoil.

In his new role, Hamdok is tasked to deal with Sudan’s mounting economic problems, including high inflation and unemployment after decades of poor governance.

Up to $2 billion of foreign reserves deposits were needed in the next three months to halt a fall in the currency, he said.

The 61-year-old economist, who has worked for the UN Economic Commission for Africa, said he had started talks with the IMF and the World Bank on restructuring Sudan’s crippling debt.

Regarding US bans on the country, Abdalla Hamdok said he had talked to US officials about removing Sudan from Washington’s list of countries sponsoring terrorism.

A State Department official, speaking to reporters on background on Monday, said while Abdalla Hamdok would be the main point of contact, US diplomats would also have to interact with General Mohamed Hamdan Dagalo, commonly known as Hemedti, the outgoing deputy chief of the military council who heads a widely feared paramilitary group.