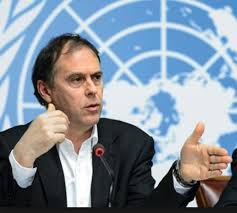 The United Nations has called off plans to hold a conference against torture in Cairo after several participant organizations criticized Egypt human rights record.

The two-day meeting planned for September 4 is themed “Defining and Criminalizing Torture in Legislation in the Arab Region”.

Rupert Colville, a spokesman for the UN High Commissioner for Human Rights said in a statement that the conference that was to be held in coordination with Egypt’s National Council for Human Rights has been postponed after several NGOs slammed the venue of the event.

“We have decided to postpone the conference and reopen the process of consultation with all relevant actors… before making a final decision on when and where to hold the conference,” he said.

EuroMed Rights on Monday said it turned down an invitation to attend the conference citing “deep reservations about the decision to hold this conference in Egypt, a country where torture is systematically practiced by the security forces.”

The regime of President Fattah al-Sisi in place since 2013, has received tirades over violation of human rights and torture practices.

Al-Sisi however brushes aside the criticism arguing that Egypt is grappling with insecurity.