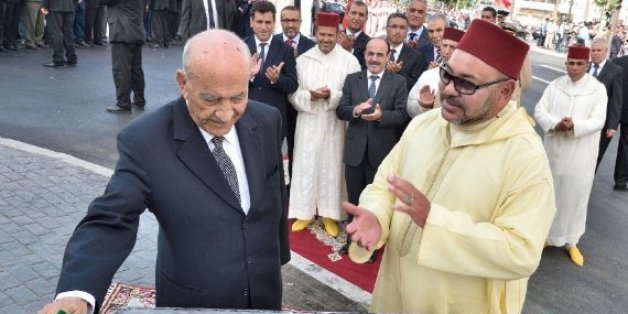 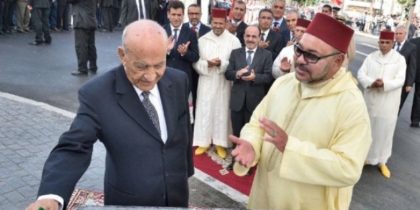 On the twentieth anniversary of his rule, King Mohammed paid tribute to a patriotic leader who served the homeland with abnegation, former prime minister Abderrahmane EL Youssoufi.

In an address to 1839 newly graduated officers from various military and paramilitary institutes, King Mohammed VI baptised the cohort after Abderrahmane El youssoufi in tribute for his leadership.

“I have decided to name this year’s Group of Graduates after Mr. Abderrahmane Youssoufi, who shares with my late father, His Majesty King Hassan II, and with me the same unwavering principles: love for the homeland and a strong commitment to the nation’s sacred values, to the Kingdom’s territorial integrity and to the defense of its best interests,” the monarch said in an address.

“I am proud of the solid ties and the special, mutual affection between me and Mr. Youssoufi,” he said.

“I therefore urge you to live up to all this name stands for, namely integrity, commitment, adherence to principles and genuine patriotism; and be loyal to your everlasting motto: God, the Country, the King,” he added.

The Monarch has already given the name of Youssoufi to a key avenue in Tangier, hometown of the former leftist leader and co-founder of the leftist party, the USFP.

This gesture represents recognition of Youssoufi’s patriotism, leadership and altruism in serving the nation’s supreme interests both in the opposition and in office.

Serving the homeland both in opposition and in office

Born in 1924, El Youssoufi engaged at an early age in political life by joining the Istiqlal party in Casablanca during the colonial era (1944-1949). Afterwards, he moved to France where he studied law and contributed to the efforts aiming at organizing Morocco’s working class.

El Youssoufi, then, returned to his hometown where he became a lawyer. His political engagement will undergo a turning point when he co-founds with key figures such as Mehdi Ben Barka and Abderrahim Bouabid the party of the National Union for Popular Forces (UNFP), an opposition outspoken leftist organization that seceded from the Istiqlal party.

The creation of the UNFP will put El Youssoufi in direct confrontation with Hassan II regime. In 1959 El Youssoufi will be arrested along with UNFP leader Mohamed Basri for stressing that accountability of the government should be to the people and not to the King. This call was then perceived as an offense to the King and El Youssoufi was accused of inciting crime and undermining public order. El Youssoufi and his colleague were sentenced in 1963 to two years in prison for conspiring against the regime.

Following the assassination of Mehdi Ben Barka in 1965, El Youssoufi will leave to France where he will stay 15 years. During that period, he joined several human rights NGOs. At that time, he was accused in Morocco and sued between 1969 and 1975 for conspiracy with the death sentence issued against him.

In 1978, the death sentence was dropped against El Youssoufi who became a member of the political bureau of the UNFP which changed its name to the Socialist Union for the Popular Forces (USFP).

In 1992, El Youssoufi was designated first secretary of the USFP. His denunciation of the electoral fraud will lead him to a voluntary exile in France. Two years later, he returned to Morocco and in 1998 he became Prime Minister leading Morocco’s political alternance experience. He held the position until November 2002.