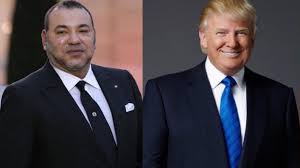 Washington has expressed determination to push forward the strategic partnership existing between the USA and Morocco and to reinforce their diplomatic ties.

In a message of congratulations to King Mohammed VI on the occasion of Throne Day marking this year the 20th anniversary of the Monarch’s enthronement, President Donald Trump said “I am confident that we will build on our free trade agreement [FTA], our strong security partnership and our diverse cultural and educational ties to ensure a safer and more prosperous future for our two peoples.”

In his message, Trump also expressed his country’s determination to continue cooperation with Morocco in the fight against extremism, the promotion of tolerance and religious understanding, and the promotion of common priorities in Africa.

“We still have a lot to accomplish together, notably the continuation of our fight against extremism in all its forms, the promotion of tolerance and religious understanding, the promotion of common priorities in Africa and the further development of the cultural link between our countries as a testimony of our friendship for more than 240 years,” President Trump said in his message.

On his part, US Secretary of State Mike Pompeo underlined the importance of the strategic partnership existing between Morocco and the United States for the stability and development of the region of North Africa and the Middle East.

“We look forward to strengthening our relationship in the years to come. Ours is a strategic partnership based on our work to advance our shared vision of a secure, stable, and prosperous North Africa and Middle East”, Mike Pompeo said in a statement released by the State Department on Throne Day.

He also recalled the longstanding friendship ties existing between Morocco and American people and governments.