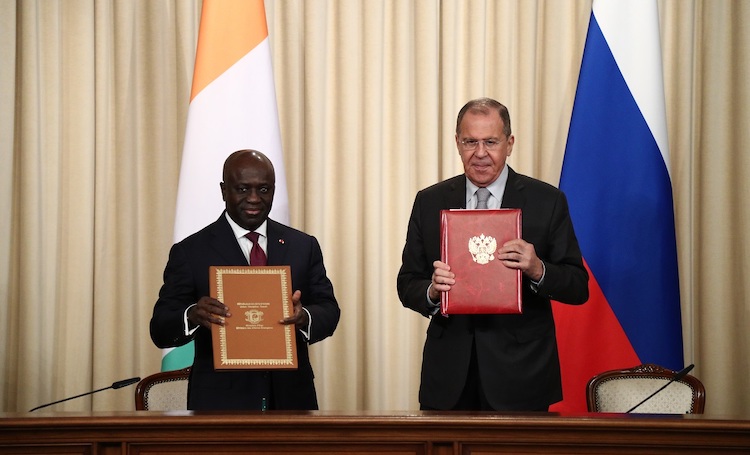 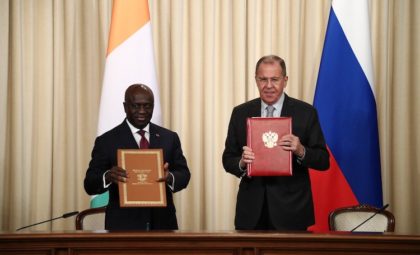 Côte d’Ivoire and Russia, this week, signed a memorandum of understanding to strengthen bilateral cooperation in several areas, including security & stability, education, energy, industry and the fight against terrorism.

The document was signed during a visit of Ivorian Foreign Minister Marcel Amon-Tanoh to his Russian counterpart Sergei Lavrov.

Besides bilateral cooperation, the two Foreign Ministers exchanged views on major global and regional issues, such as crisis settlement and peacekeeping in Africa.

Countering international terrorism and extremism in the context of collective efforts to neutralize these threats in Africa and beyond was also at the focus of their talks.

In the face of Chinese, American and French competition, Russia is gradually increasing its influence in Africa through strategic investments in energy and minerals. It is also using military muscle and soft power.

Interaction between Russia and Africa has grown exponentially this century, with trade and investment growing by 185% between 2005 and 2015.

The first Russia-Africa summit is scheduled to take place in Sochi in October. The summit will be jointly chaired by Egyptian President Abdel-Fattah El-Sisi, the current chair of the African Union (AU), and Russian President Vladimir Putin.

The summit will bring together African heads of state and heads of major regional organizations.

It will focus on the prospects of relations between Russia and African countries, and how to foster political, economic, artistic and cultural cooperation between the two sides.

The agenda will also address other joint efforts to face evolving challenges and threats, in addition to ways to boost regional stability.