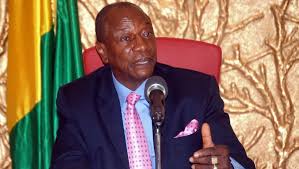 US ambassador to Guinea Conakry has said his country will not back President Alpha Conde should he seek a third term in office as rumors in the country point out the Guinean leader is mulling plans to amend the constitution to this end.

Speaking last week in “Les Grandes Gueules”, a popular radio show, Dennis Hankins pointed out that Washington is opposed to any constitutional amendment in favor of incumbent presidents.

Plans by President Conde to modify the constitution is the talk of town though the leader himself has not made any public comments on the thorny issue as his current term ends next year.

However, in May, the ruling Guinea People’s Rally reportedly urged the President to alter the constitution in view of running for a third term in the 2020 elections.

In reaction to the plans, Justice Minister Cheick Sako resigned as he denounced the project and lambasted the government for sidelining him in the drafting of the new constitution.

The US diplomat Dennis Hankins has repeatedly underlined in private and publicly Washington’s position on the issue.

“If there is any attempt in that end, we will oppose it like it was the case in other countries,” he told the talk show last week.

Many people opposed to the constitutional change welcomed Washington’s position but several other Guineans laid into the comments as a US interference in Guinean internal affairs, the online media noted.