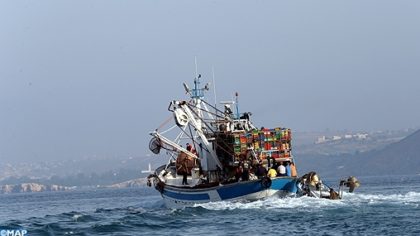 Spanish fishing trawlers will return to the Moroccan waters as of Monday, July 22, announced Spanish Minister for Agriculture and Maritime Fisheries, Luis Planas, in a statement released by his department.

The meeting of the first joint commission of the Morocco-EU fisheries agreement, held in Rabat, this week defined the technicalities to issue the first fishing licenses and thus allow the return of Spanish vessels to Moroccan waters, Luis Planas said.

The Spanish official expressed his country’s “satisfaction” with the final adoption of the sustainable fisheries Agreement between Morocco and the European Union (EU), following its ratification by the Kingdom, and stressed the importance of this agreement for the fishing sector in Spain, and mainly for certain categories of Andalusian, Canarian and Galician fleets, since Spain grasps more than half of the 138 licenses granted by Morocco.

The entry into force of this agreement will allow vessels from 11 EU countries (Spain, Portugal, Italy, France, Germany, Lithuania, Latvia, The Netherlands, Ireland, Poland and United Kingdom) to fish in Morocco’s waters, including 92 Spanish vessels.

“As far as Spain is concerned, the applications for fishing licenses have already been prepared, and the ship-owners have made the necessary payments to start the activity next week,” the Spanish official said, adding that “70 requests to operate in Moroccan fishing areas have already been received.”

The 4-year agreement allocates fishing opportunities for the EU in exchange for an overall financial contribution of €208 million, i.e. €52.2 million a year. A substantial part of this contribution will be used to promote the sustainable development of the fisheries economy in Morocco and the Sahara fisheries sector.

The renewed fisheries accord, like the renewed farm agreement, extend European trade preferences to agricultural and fishery products from the southern Moroccan provinces.

The two deals enhance the benefits and advantages of local Sahara inhabitants and strengthen the multidimensional strategic partnership existing between Morocco and the EU.