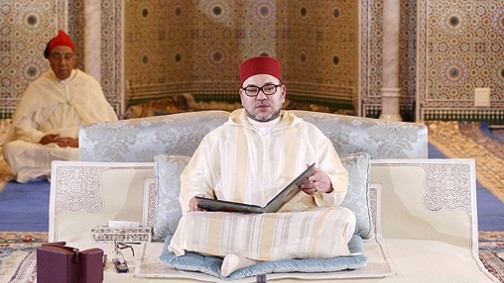 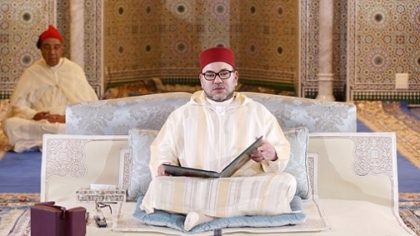 The leadership of King Mohammed VI and his steadfast commitment to promoting the values of tolerance, inter-religious dialogue and coexistence at home and abroad stand as a distinctive feature of Morocco in the last two decades.

“As Commander of the Faithful and defender of the faith, I am committed to protecting the rights of Muslims and non-Muslims alike”, said the Sovereign in a speech, affirming that Moroccan Jews enjoy the same constitutional & political rights as their fellow Muslim citizens, and play a key role in the country’s economy.

King Mohammed VI has called on multiple occasions for working together to achieve a new world order for peace while stressing the need for coexistence and acceptance of diversity and difference.

The Jewish community in Morocco was never treated by Muslims as a minority, as its members were actively involved in all fields of activity and were present at all levels of society.

Christian residents in Morocco and temporary visitors have always practiced their faith freely in churches.

The visit by Pope Francis last March was another chance to highlight Morocco’s tolerant religious model and its international role in inter-faith dialogue.

King Mohammed VI has also encouraged monotheists to pool efforts to fight terrorism, which is sparing no community and no country.

“Those who engage in terrorism, in the name of Islam, are not Muslims. Their only link to Islam is the pretexts they use to justify their crimes and their folly. They have strayed from the right path, and their fate is to dwell forever in hell”, said the Monarch in a speech in August 2016.

“They think – out of ignorance – that they are engaging in jihad. Since when has jihad been synonymous with killing innocent people? The Almighty says: “Do not transgress limits, for Allah loves not transgressors”, stressed the Sovereign.

He stood up against terrorism by shoving aside bogus religious claims and reminding the world that suicide and murder are not permitted in Islam.

Building on its moderate school of Islam as a bulwark against extremism conducive to pre-empting radicalism at home and abroad, Morocco has extended the project of the Mohammed VI Institute, created in 2015, for the training of Imams to respond to the growing demand from a number of countries.

The extension project of the Rabat based institution enables it to fully fulfill its role as a vector of religious diplomacy aiming to counter the terrorist threat that feeds on extremist interpretations of religions.

The Imam training center aims to play a leading role in fighting religious radicalism via instilling the values of moderate form of Islam in the next generation of Muslim religious leaders from across the region and the world.

Other soft initiatives to counter extremism rhetoric include establishing a radio station, Radio Coran, which broadcasts prayers throughout the day, and even the pardoning of repentant Salafists serving prison sentences for terrorism-related offenses.

A program dubbed Mousalaha was launched by the prison administration and Dar Al Hadith Al hassania to deradicalize those who serve jail sentences on extremism related charges.

Morocco also set the example for Arab and Islamic countries in women empowerment. The North African Kingdom continues to expand women’s rights under the leadership of King Mohammed VI who has approved a motion, allowing women to become “Adouls”, public notary officials, a profession traditionally held by men.

Tolerance is not just a rhetorical aspect in Morocco’s domestic and foreign policy. The country stood out in Africa as the sole country that has a migration policy offering residency status to migrants.

Morocco has “welcomed people coming from sister nations to this African land, with their different religions, cultures, traditions, family habits and lifestyles,” said the King in a previous message.

Morocco organized two campaigns for migrants to regularize their status and launched several programs aimed, among other things, at ensuring the integration of migrants, asylum-seekers and their families.

Besides adopting a preventive strategy to fight terrorism at home, at the international level, Morocco, in its capacity as Co-Chair of the Global Counterterrorism Forum (GCTF), has always stressed its commitment to multilateral efforts to fight the scourge of terrorism.