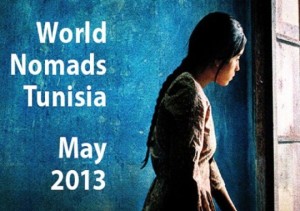 The fifth edition of the World Nomads Festival, to be held in New York next May, will honor Tunisia and its rich arts and culture just two years after the North African country ignited the Arab Spring flame.
The event, organized by the French cultural Center in New York, French Institute Alliance Française (FIAF), is conceived as a forum for dialogue between cultures.
Geographically situated at the epicenter of the European, Maghreb, and African worlds, Tunisia has served as an essential point of passage for people and ideas since ancient times. Today, following the events of January 2011, a groundswell of artistic innovation and experimentation permeates the country, anchoring it as a hub for intellectual and artistic dialogue reaching far beyond the Mediterranean region, the FIAF said in a press release.
Tunisian artists, who took to the streets by the thousands in the protests that led to the overthrow of President Ben Ali, “continue today to play an essential role in defending freedom of expression in the nascent democracy,” the release said.
Some of the most influential contemporary artistic figures active in Tunisia today are to take part in World Nomads Tunisia, including dynamic female leaders who are re-energizing Tunisia.
According to the organizers, the festival, co-presented with leading Tunisian and U.S. cultural institutions, is dedicated to advancing critical thinking about this vibrant country as it carves out a new identity post-revolution.
“In this critical period of transition for Tunisia,FIAF proudly supports and celebrates the phenomenal artistic creativity that has emerged on the heels of the Arab Spring,” said Marie-Monique Steckel, President of FIAF.
“We’re thrilled to present this extraordinary opportunity for leading Tunisian artists to visit New York, and for New Yorkers to discover the richness and diversity of Tunisian culture through an exciting array of cultural events,” she said.
The month long festival which features art, film, photography and dance shows, will pay a special attention to Tunisian women as being part of North Africa’s most dynamic women leaders. They will participate in a series of engaging talks on the country’s artistic, social, and political transformation since the events of January 2011. Speakers will include Yamina Benguigui, French Minister of Francophonie; Amna Guellali,Director of Human Rights Watch Tunisia; model and blogger Kenza Fourati;Lina Lazaar Jameel,International Art Specialist at Sotheby’s; Tunisian contemporary arts specialist Leila Souissi; Dora Bouchoucha, film producer and founder of Nomadis Images; writer Hélé Béji; and El Iza Mohamedou, Chief Political Analyst at the African Development Bank.
World Nomads is FIAF’s biennial celebration of 21st-century transculturalism in the Francophone world.