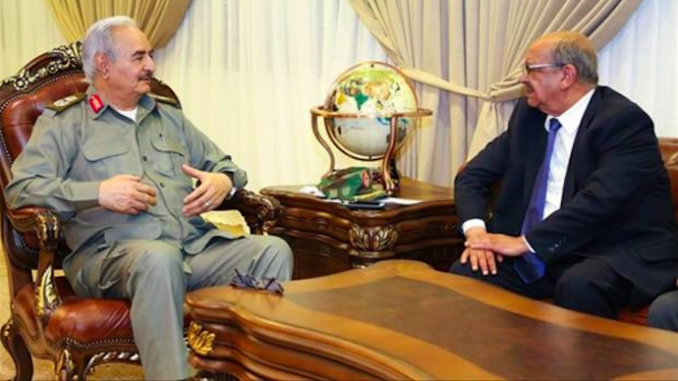 Algeria’s foreign ministry Wednesday denied Prime Minister’s criticism of Khalifa Haftar whom he said is nothing “compared to the holiness and greatness of Libya as well as to its regional and international significance”.
Prime Minister Noureddine Badawi during a meeting with UN-backed Government of National Accord (GNA) interior minister Fathi Pashagha was quoted for tirade on Libyan east-based military rebel who launched early April a military offensive to take control of Tripoli.
In a statement relayed by Radio Algeria, an official from the Algerian foreign ministry the comments were false, and misleading.
Badawi also according to statement by the GNA interior ministry office also called on the President of African Union (AU) to countries that involved in Libya’s stabilization.
The AU President is current Egyptian President Abdelfattah al-Sisi who is himself a staunch supporter for Haftar’s offensive.
The Algerian foreign ministry also stressed that “a political solution negotiated and accepted by all parties is the only way to solve the conflict, ensure sustainable peace and stability, and preserve the supreme interests of the brotherly Libyan people.”
Algiers and Tunis including Cairo have been trying to bring the Libyan sides to peace but to no avail.
Haftar in September last year reportedly publicly scolded Algeria that he accused of taking the side of the GNA in the Libyan crisis. Field Marshall also threatened to export war to oil and gas-rich African country.