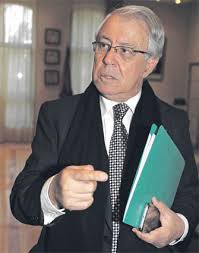 The Permanent Secretary of the Academy of the Kingdom of Morocco, Abdeljalil Lahjomri, won the Grand Prix de la Francophonie awarded by the French Academy.

The prize, part of the 2019 list of 64 prizes and medals granted by l’Académie Française, was awarded to M. Lahjomri, ex-aequo with the Czech poet Petr Kral.

Lahjomri was awarded the distinction in recognition of his academic and intellectual career and his achievements at the head of the Academy of the Kingdom of Morocco.

The 40-member French Academy chooses the winners of its distinctions on merit, without any application submissions, on the basis of their academic performance.

Lahjomri said he was “honored to win this prestigious distinction which recognizes Morocco’s place on the international level and is a credit to the academic work done by and on Morocco.”

He added that he is “even happier because it is a recognition of Morocco, of the Kingdom’s Academy, and of the rich and ancestral Moroccan culture.”

The French Academy, founded in 1635, is an assembly of 40 members elected for life by vote of its members. These 40 ‘Academicians’, a term specific to the Academy, carry the name of ‘Immortals’ as death is the only way they lose their title.

The Academy is the guardian institution of the French language and is entrusted with updating the French dictionary. It is composed of poets, novelists, playwrights, literary critics, philosophers, historians, scientists, and, by tradition, high-ranking military men, statesmen, and religious leaders, who have “all particularly illustrated the French language.”