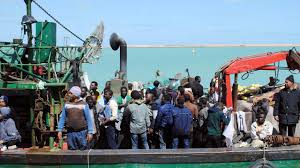 A group of 75 migrants who have been stranded on a boat in the Mediterranean sea for 12 days and who are in critical condition have refused food and medical assistance offered by the Tunisian Red Crescent.

The migrants, mostly from Bangladesh, have refused aid from medical doctors and have demanded to be sailed to Europe, their initial destination after they set off from Libya, a Tunisian source told Reuters.

Mongi Slim, an official from the Tunisian Red Crescent, in the port of Zarsis, said the migrants are in bad condition after 12 days at sea.

Maridive 601, an Egyptian boat servicing oil platforms between Tunisia and Italy, had rescued the migrants, off the Tunisian port of Zarzis

A Tunisian source told Reuters that authorities of Medinine governorate have refused to allow the migrants to reach Tunisian shores because migrants’ centers are too crowed.

Last month, at least over 60 migrants, mostly Bangladeshis, drowned after their boat capsized in the Mediterranean off Tunisia. They had set off from Libya and were on their route to Europe.

In the first four months of 2019, 164 people have died on the route, a smaller number but a higher death rate than in previous years, with one dying for every three who reach European shores, the UN refugee agency UNHCR said.