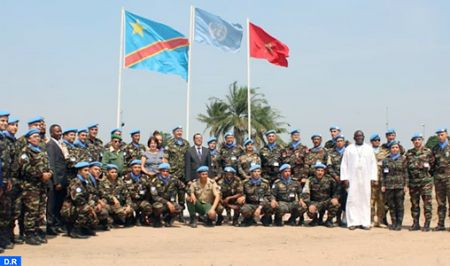 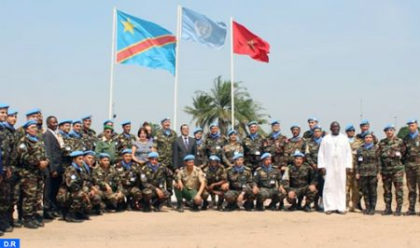 The United Nations Organization Stabilization Mission in the Democratic Republic of the Congo (MONUSCO) has honored Moroccan peacekeepers deployed in the country in a ceremony held on Tuesday in Kananga.

MONUSCO forces commander Brazilian Lieutenant General Elias Rodrigues Martins Filho handed the Moroccan contingent medals of merit in recognition of their “commendable services” within the UN mission, said Morocco’s embassy in Kinshasa in a statement.
The MONUSCO forces commander praised the Moroccan contingent and its contribution to peacekeeping and the protection of civilians.

He also highlighted the contribution of Morocco to the various peacekeeping missions in the DRC since the 1960s.

The Moroccan contingent, made up of more than 1,300 elements, is deployed notably in Kasai in the center of the country and in Bunia in North Kivu. It has been reinforced by 25 female element in Kananga.

Moroccan ambassador to Kinshasa Rachid Agassim attended the medal awarding ceremony along with the embassy’s military Attache Zine Hrizou. the Deputy Head of the MONUSCO Office, Representatives of the Office of the United Nations High Commissioner for Refugees (UNHCR), as well as several officers and representatives from other countries also took part in the ceremony.

The Moroccan military enjoys a very good reputation, both in the regions of their deployment and the Congolese authorities.

In addition to the medals of merit attributed to Moroccans on Tuesday, the UN had honored the sacrifices of Moroccan volunteers in UN Peacekeeping Operations on May 29, describing the North African country as a key partner.
“Morocco is a longstanding and key partner for the UN peacekeeping operations,” UN peacekeeping spokesman Nick Birnback told the Moroccan news agency on the international day of peace keeping, marked earlier this month.
He said Moroccan blue helmets are serving in some of the most hostile environments citing the peacekeeping mission in the Central African Republic and the Democratic Republic of the Congo.
He paid tribute for the 43 Moroccan soldiers who lost their lives on duty for the causes of peace in Africa.

Five Moroccans were among the 128 personnel, who lost their lives in the line of duty in 2015, and who were honored by the United Nations with the Dag Hammarskjöld Medal.