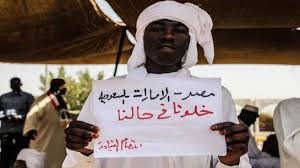 The Transitional Military Council (TMC) Monday announced the end of all talks and nullification of all agreements signed with leaders of the revolution and declared that the country will go to polls in nine months.

Leader of the TMC Lieutenant General Abdel Fattah al-Burhan said in an address the junta has ended all talks with the Declaration of Freedom and Change Forces (DFCF) alliance, representing the protesters who have been camping in front of the ministry of defense for weeks.

The TMC and DFCF had been engaged in talks since the army removed former leader Omar Beshir early April. The talks reached a standstill late last month over who will dominate the “three-year sovereign transition” agreed by both sides.

The DFCF late last month called several days of civil disobedience to protest the TMC’s refusal to give up power in favor of civilians.

Burhan also announced elections in nine months, in further sign of theft of the revolution.

Earlier on Monday, paramilitary forces known as Rapid Support Forces (RSF) stormed the sit-in and dispersed protesters. The raid, according to the Central Committee for Sudanese Doctors (CCSD) and other media sources caused the death of some 35 people.

Protests in several other cities including Omdurman, near Khartoum, and Gadarif, eastern Sudan, were also broken.

This Tuesday, one of Sudan’s main protest groups, the Democratic Alliance of Lawyers, urged “some Arab countries” not to interfere in Sudanese affairs and to drop their support for the ruling military council.

“We ask that some Arab countries lift their hands from Sudan and to stop supporting the Military Council and consolidating the pillars of its rule with the aim of preserving it and protecting their own interests that are harmful to the Sudanese state and its citizens,” said the alliance, which is part of the Sudanese Professionals’ Association.

The alliance’s call is seemingly directed at Saudi Arabia, the United Arab Emirates and Egypt.

Following the overthrow of President Omar al-Bashir in April, the UAE and Saudi Arabia together pledged $3 billion in financial and material support to Sudan.