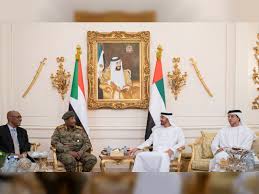 The head of Sudan’s ruling military council, Lt-Gen Abdel Fattah al-Burhan has visited the United Arab Emirates (UAE) over the weekend, a day after he visited neighboring Egypt.

Al-Burhan on Sunday met Abu Dhabi’s crown prince, who expressed the UAE’s support for Sudan as it navigates a transition after the overthrow of autocrat Omar al-Bashir, the Emirates news agency WAM reported.

In his meeting with Burhan, Bin Zayed called for a national dialogue in Sudan towards “peaceful political transition”.

Saudi Arabia, UAE and Egypt are the main backers of Sudan’s military rulers.

Protesters calling for a transition to democracy have warned against any intervention by the three regional allies.

Sudan’s main protest group, the Sudanese Professionals’ Association, said on Sunday it had held its first meeting with the Saudi ambassador in Khartoum, calling on him to support a transition to civilian rule.

According to the BBC, Saudi Arabia and UAE have already given Sudan $500m as part of a $3bn pledge to support the economy shortly after President Omar al-Bashir was ousted.

Sudan is one of the leading contributors of troops to the four-year Saudi-led war in Yemen, where the kingdom and the UAE are fighting Iran-backed rebels.

Al-Bashir’s government, which touted its Islamist credentials on taking power in 1989, renounced ties with Iran when it joined the Gulf coalition in 2015.

The military leaders have announced earlier this month that they have reached an agreement with the opposition alliance for a three-year transition period to a civilian administration.

The agreement includes a parliament dominated by opposition groups. A cabinet will also be appointed by the opposition Declaration of Freedom and Change Forces.

However, the two sides  are at odds over the composition of a new joint civilian-military transitional council, with protesters calling for a civilian-majority council with a civilian leader and the generals demanding a military-led body.