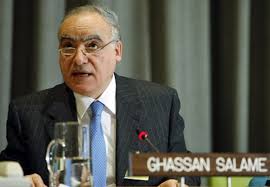 Libya: Haftar chides UN envoy for taking side in the conflict

Khalifar Haftar, commander of the east-based forces opposed to the internationally recognized Government of National Accord (GNA) has accused the UN envoy trying to fix the political crisis in the North African country of being “biased” in his mission.

“He wasn’t like that before. He has changed from an impartial and honest mediator, he has become a biased one.”

The leader of the so-called Libyan National Army (LNA) launched the offensive early last month at the time UN Secretary General Antonio Guterres was in the city. Haftar says the campaign aims at flashing out militia and terror groups faring under the UN-backed GNA.

The UN has been campaigning for political settlement of the Libyan crisis, which started following the death of former ruler Muammar Gaddafi in 2011 in a NATO-backed revolution.

Haftar told the French media that he backs a political solution but insisted that the priority is crashing the terror groups.

“Of course a political solution is the objective,” he said.
“But to return to politics, we need to finish with the militias. The problem in Tripoli is a security one.”

Last week, the UN envoy for Libya Ghassan Salame has called for immediate action to cut off arms flows to the warring sides in Libya, warning that the ongoing battle for Tripoli was “just the start of a long and bloody war”.

In a briefing to the Security Council, Ghassan Salame said many countries were supplying weapons to the GNA in Tripoli and forces led by Khalifa Haftar.

“The violence on the outskirts of Tripoli is just the start of a long and bloody war on the southern shores of the Mediterranean, imperilling the security of Libya’s immediate neighbors and the wider Mediterranean region,” Salame said.

Without immediate measures to stop the flow of arms, “Libya will descend into civil war which could potentially lead to a Hobbesian all-against-all state of chaos or partition of the country,” he said.

He warned that armed groups, including the Islamic State group and al-Qaeda have already exploited the security vacuum created by the battle for the capital.

Salame urged the council to set up a commission of inquiry to “determine who has taken up arms” and prevent indicted war crimes suspects from taking part in military operations.

More than 75,000 people have been driven from their homes in the latest fighting, 510 have been killed, and over 2,000 injured, according to the World Health Organization.