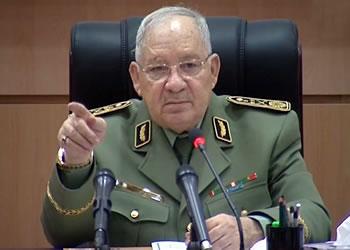 Algeria: Army urged protesters to go to July 4 presidential poll as way out of political quagmire

The Chief of the Algerian army has called on protesters and the opposition to accept the planned July 4 presidential elections, noting that the poll is the only way forward to avoid power vacuum after unpopular transition president’s 90 days come to an end.

Algeria has been reeling from tumultuous political uncertainty since March after waves of demonstrations have called for the fall of the 20-year old regime.

The resignation of former ruler Abdelaziz Bouteflika early April following pressure from the army did not calm the protests.

Interim President, Abdelkader Bensalah set elections for July 4 but the move was widely rejected by thousands of Algerians and a dozens of organizations including leading opposition parties. Algerians are demanding a complete overhaul of the regime.

Army Chief, Lieutenant General Ahmed Gaid Salah, who has been instrumental in Bouteflika’s resignation and has appeared as a kingmaker, early this week indicated that the election would help the country avoid a constitutional trap.

“Holding a presidential election could help [Algeria] avoid falling into the trap of a constitutional void, with its accompanying dangers and unwelcome consequences,” he told the media at a press conference.