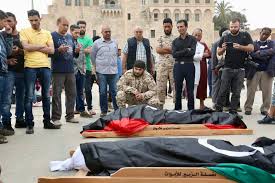 Amnesty international has denounced the latest violent attack that targeted refugees and migrants at a detention center on the outskirts of Tripoli, calling for the protection of civilians and trial of those responsible for this horrible aggression and assault.

Armed men raided the Qasr Ben Ghashir detention center, south of Tripoli on April 23 and shot a number of the people being held there. According to the UN Refugee Agency (UNHCR) at least 12 people were injured and hospitalized.

Video footage shows distressed refugees and migrants in the aftermath of the shooting, some of them screaming, while several other injured were lying on the floor, their bandages soaked with blood.

“This was an utterly reprehensible attack. Direct attacks on civilians are serious violations of international humanitarian law and constitute war crimes. There can be no justification for targeting defenseless civilians. These refugees and migrants should not even be detained in the first place”, said Magdalena Mughrabi, Deputy Director for MENA at Amnesty International.

“This incident demonstrates the urgent need for all refugees and migrants to be immediately released from these horrific detention centers where they are held arbitrarily in inhuman conditions and routinely subjected to abuse,” added the AI official.

“All parties to the conflict must protect migrants and refugees from further attacks and ensure that those injured urgently receive adequate medical care. The authorities detaining them and all sides must allow humanitarian organizations to access the facility as a matter of urgency, and release them to a place of safety”, said Magdalena Mughrabi, noting that this horrific attack shows the urgency for EU countries to ensure safe routes out of Libya for refugees and migrants trapped in the North African country.

Libya’s Government of National Accord has issued a statement condemning the incident and accusing forces loyal to General Khalifa Haftar of carrying out the attack. It also stated that preparations were underway to transfer the migrants and refugees to areas away from the fighting.

UNHCR has announced that efforts are underway to urgently relocate the approximately 890 refugees and migrants held at Qasr Ben Ghashir to safer areas.

There are at least 3,600 refugees and migrants trapped in detention centers in areas of conflict around Tripoli – affected areas or areas at risk of violence, according to UNHCR.

Since the Libyan National Army launched its offensive to take over Tripoli on April 4, there have been at least 90 civilian casualties including 21 civilian deaths, according to UN agencies.

North Africa Post's news desk is composed of journalists and editors, who are constantly working to provide new and accurate stories to NAP readers.
NEWER POSTMorocco Reiterates Support for a Democratic, Inclusive and Unified Libya
OLDER POSTBMW to abandon DR Congo Cobalt for Morocco in fight against child labor